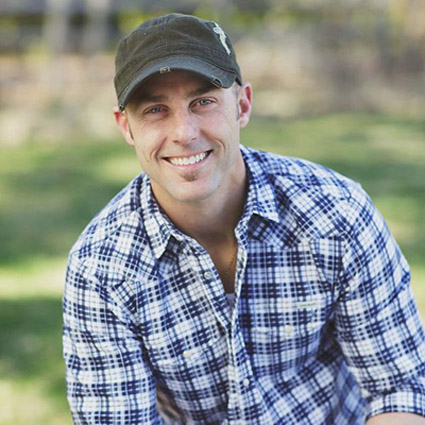 By Erin Hedlun, Director of Communications and Marketing for Global University

Practice kicks. Running drills. Weight lifting. Field goal unit timing. These are all crucial elements in preparation for a big game. For NFL kicker David Akers, these are only a part of his preparation routine. Another aspect to “shaping up” for the game involves time spent studying God’s Word, daily prayer and a focus on the ultimate win – living a life that is pleasing to God and attracts others to Him. Akers life is multi-faceted. Time spent playing the game he loves – football – in front of thousands of fans in brightly lit stadiums, and time spent preaching God’s word in front of thousands of congregants in local churches throughout the nation.

David Akers grew up as what most would consider an ‘All American’ boy – rugged good looks, a passion for sports, son to a local principal and teacher. Born and raised in Kentucky, he would go on to attend the University of Louisville, KY, where he stood out as a football phenom. Signed as an undrafted free agent into the NFL with the Atlanta Falcons in 1997, Akers had a belief in God, but was lacking a personal relationship with Him. David married Erika in 1997and life seemed happy. However, after a brief stint playing for the NFL in Europe in 1999, David was sidelined by a sever case of food poisoning and found himself quarantined in an East Berlin hospital with no access to media or communications outlets. He found a way to pass the time by reading books, a surprising new interest for this self proclaimed “reading hater”.

After his recovery and return home, then in Atlanta, GA, his wife introduced him to the “Left Behind” book series, written by authors Tim LaHaye and Jerry B Jenkins – a fictional account of the Tribulation and surrounding world events. David hungrily devoured the pages of each book, often looking up related Biblical passages, and finding himself growing more and more hungry for the Word of God. One verse turned into two, one chapter turned into a whole book, and eventually David had read the entire Bible, and felt transformed by the life changing truths within. This experience changed his life, and most importantly, his heart. He felt renewed with a call to use his platform of professional sports to bring His light into dark places.

David developed a ministry, entitled ‘David Akers Ministry’, and through connections at his local church, Marlton Assembly of God, Marlton, NJ, David began traveling to various church events, district events, youth retreats and services ministering the word of God and sharing his testimony. During this time, David also participated in many Bible Study groups among his like-minded teammates during the football season, and developed life-long friendships with fellow players who also shared his beliefs.

Though a professional athlete, David’s life was not without trouble. He experienced several moves across the country as his contract with the Philadelphia Eagles ended and he signed on with the San Francisco 49ers, where he remained for two seasons until being released and joining the Detroit Lions in 2013. He suffered a heavy financial loss as he fell victim to a Ponzi scheme through Triton Financial, and experienced a medical scare as his daughter, Halley, had a cancerous tumor surgically removed in 2011. He has encountered first hand the difficulties of selling a home during the housing market crash, and the unforeseen expense of extensive home repairs. However, through it all, David’s eyes remain fixed on the One Above, and he is able to experience joy even in the midst of frustration and trials.

To increase the legitimacy of David’s ministry endeavors, he began researching online universities through which he could receive Biblical training to become a licensed minister. While reviewing many options, he was presented with the offerings of Global University’s Berean School of the Bible, and he recounts, “Many of the institutions that I looked into had astronomically high price tags attached. As I reviewed what Global University had to offer, I was shocked at the affordability of the courses, as well as the flexibility of the schedule. I could travel all over the country while I was playing ball, and fit in my studies when I had time, regardless of what city I happened to touch down in that night. It was the absolute best option for my busy life.”

David completed Berean courses and was able to receive official licensed credentials in May of 2013. David states, “The service projects that are required for each of the Berean courses were the most enjoyable aspect of my Global University studies. I am heavily involved in the Christian music industry, and as one such project, I set up a large concert outreach involving several well-known Christian music artists. This made a huge impact on my community and I know many lives were transformed that evening. This was a required service learning project, but it was much bigger than that – it was a way to use the knowledge I received through my Berean courses to practically reach my city for God’s glory.”

Though David and his family are facing the uncertainty of an unknown future as they move to Nashville, TN, one thing is clear – David knows who holds the future. “God has brought my family and me through so many unique experiences over the last decade. He has never forsaken us and has always provided peace and comfort through our journey. A life well lived for Jesus is always an adventure,” reflects David.

If you have any questions, feel free to contact us!